From our post yesterday looking at a not-so surprising article in yesterday’s NY Times, Who’s Driving Twitter’s Popularity? Not Teens, which looks at the popular growth of some of the latest social media in the last few months, specifically, Twitter; I thought I’d add my 2-cents. As we noted, they supply some interesting data from comScore including that just 11% of Twitter users are between the ages of 12 to 17. Overwhelmingly, Twitter users are an older segment of the population and as Forrester Research notes in the article, people aged 35 to 54 using social media grew 60 percent in the last year.

Shocking? Hardly. Over at Mashable they’ve highlighted this in their coverage of the NY Times piece here, and had written about this just a few weeks ago. In the NY Times piece they highlight a couple of obvious reasons why, first, that the nature of the technology, much more public than social networks like Facebook, is less enticing to teens who are more comfortable interacting and sharing with their friends rather than random strangers coming across their streams. This in turn, looking at it from a professional perspective, offers adults a means to find interesting and useful topics and discussions relevant to their interests.

But very simply as a segment of the population, the ‘Teens’ demographic overwhelmingly uses social media/networking compared to other age groups. In a sheer numbers comparison, there’s not many more users to attract to the technology while other age groups, all you have is room to grow. In fact, in the case of Twitter, that may be what will eventually happen for 12-17 subset of users. But for me, what is fascinating is how fast the comfort level is rising in the adoption and ongoing usage of social media by older users – not so much that they are leading the charge in using technology, but rather its overall importance as a tool among many tools they use. In the past, in the early days of the dot com boom and bust, web usage was still highly segmented. For social media today, its usage overall is beginning to top even the frequency users access their emails: 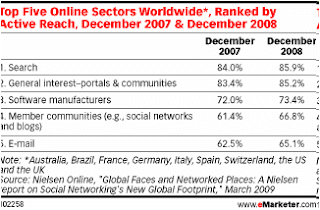 In fact in a follow-up piece on their technology blog, BITS, they look at this growing adoption and usage by older demographics, citing recent Forrester reports and data. Clearly, as a communication and interaction medium this growth in usage by older segments of the population raises some questions. For marketers, particular brand managers, the hope that the power of tv, radio and other traditional mediums to influence purchasing decisions will somehow remain strong is increasingly questionable. Why? Well, looking at advertising dollars and ROI through those mediums seems shaky at best. I’m sure any media buyer out there would say not so, but I am biased. And as we pointed out this week, clearly marketers see the numbers and the level of adoption by all age groups and customer segments, and its not a question of should we use social media, but when.But looking past marketing, the impact of social media on the business landscape raises even more questions. How does it impact customer service, if increasingly customers feel they are able to get better and faster responses via social media a la Twitter, case in point, Comcast and Southwest Airlines to name a few. How might it impact product development, market research, sales, etc, etc. Of course, I may be simply preaching to the choir.But then again, every time I work with direct marketers and product managers in certain industries, I continue to hear, well our audience just isn’t that tech savvy. When I hear that, my eyes glaze over and mind drifts away and I think, for your sake, I hope it’s true.

Yesterday I posted some data on demographics of an online ad clicker; I figured I would end the weekend by leaving some more interesting data recently taken by eMarketer here. According to eMarketer, social network ad spending, which is a little over $1.4 billion, still represents a small percentage of total online ad spending which is estimated to reach $24.9 billion in 2008.

What does this mean for companies thinking about investing in social network advertising? Now’s a great time to dive in and experiment with ads using social media. What’s important here is listening to feedback and fixing mistakes.

It will be interesting to see how social network ad spending will change over the next couple of years.