In association with EmPower Research, a Genpact company, The Institute for International Research invites you to join us for a one hour complimentary Web Seminar:

Today the rise in customer participation in Social Media is pushing marketers and researchers to listen and learn from Social Media conversations. While numerous applications of Social Media research are taking shape, understanding customer experience through the new media is gaining tremendous mind-share.

Social Media provides an excellent platform to listen to customer concerns, criticisms, and feedback, and address issues through one-to-one engagement. Social Media listening helps brand managers and marketers in not only differentiating their service quality but also aligning them with customer expectations, thus, driving greater satisfaction and better experience. In this session, you learn how Social Media can provide holistic insights on the ‘voice of consumer’.

Participants will learn:
‘ Understanding and measuring customer experience through Social Media ‘ the possibilities today
‘ Beyond listening- Tracking voice of the consumer across the relationship cycle
‘ Social engagement- The path to improving Net Promoter Score/Customer Satisfaction Index

Sangita Joshi is the Co-founder and Managing Partner of EmPower Research – a Genpact company. She has over 20 years of experience in research of which the last eight years have been at the executive level. At EmPower, Sangita leads social media research and delivery to global clients, and closely works with the innovation team to continuously evolve solutions that aid decision-making in a dynamic business environment. She regularly writes for leading industry publications and speaks on topics related to social media-led insights.

About EmPower Research
EmPower Research, a Genpact company (NYSE:G) provides integrated media and business research services. We help our clients understand stakeholder perception and needs, empowering them to service better. We use proprietary methodologies to listen and learn about conversations in the customer ecosystem, deriving real insights for active stakeholder engagement. For more information, visit http://www.empowerresearch.com

Social media is still on the rise. Large networks, especially Facebook, increase not only their reach, most users use the site also more intense the longer they are members. These are findings from a recent research report by Gartner. But the report shows more:

Gartner surveyed 6.295 people aged 13-74 in eleven different markets between December 2010 and January 2011 .37 percent of respondents – most of them from young target groups – stated that they use their favorite social network more intense than at the beginning of their membership.

However, in some markets there seems to be an end of the rise of social media usage among consumers. Nevertheless, 24 percent said that the intensity of usage has decreased.

The markets where the users are more engaged with social media include, among others, South Korea and Italy, while the users in Brazil and Russia are tending to be less on the social web. The most important argument for reduced use: data protection and privacy.

What does this mean for Social Media Research?

The same as for Social Media Marketing. That’s easy enough…
It isn’t enough to have a survey or even a poll on Facebook. That’s not how it works. We need innovation, we need inspiration. And we need to know the users of social networks annd their behaviour before we can survey than. Actuality is king as well keeping the attention high in order to use the very short attetion span in social networks. That, by the way, is to my point of view one of the most important reasons why gamification is more than a buzzword in recent times.

So let’s get creative, and start by attending The Market Research Event 2011 in Florida, hosted by IIRUSA…

About the author: Christian D??ssel is blogging about market research in German language here and here.
After having worked for TNS, TBWA and other strategy and market
research agencies he now holds the position of Senior Research Director
at MM-Eye in Hamburg / Germany with special responsibilities for MM-Eye’s new media and online research approaches

Are you using or considering using social media in your research campaigns? In association with Citrix, The Institute for International Research invites you to join us for a one hour complimentary Web Seminar on creating a holistic approach to social media strategy.

Social Business: How to Create a Holistic Approach to Social Media

When it comes to social media, there’s no single “right way” to use it for business. Within its channels companies of all sizes can engage with prospects and customers to drive sales and provide services in a variety of ways.

What matters, however, is that the social media experience your business provides be consistent across the board. A holistic approach is the key to a successful social media program.

Join industry expert Alex Beauchamp to understand the many components of social business and learn how to put them all together into a cohesive plan that best reflects your organization’s personality and value.

In this webinar, you will learn how to:
‘ Engage and monitor in the social space
‘ Use reporting metrics, insights and advocates
‘ Create social content and execute social campaigns
‘ And more…

Register Now. After registering you will receive a confirmation email containing information about joining the Webinar. This web seminar is sponsored by Citrix.

About Citrix Online:
Citrix Online provides secure, easy-to-use online solutions that enable people to work from anywhere with anyone: GoToMyPC?? for remote access, GoToAssist?? for remote support, GoToMeeting?? for online meetings and GoToWebinar?? for larger Web events. A division of Citrix Systems, Inc. (Nasdaq: CTXS), the company is based in Santa Barbara, California.

One was Dawn Lacallade from ComBlu. She spoke twice today, though I only had the pleasure of observing one of her sessions. I also enjoyed the presentation by Sean Bruich, from Facebook. Sean generously shared a lot of examples with real data, collected by Facebook. Sitting in these two sessions back-to-back gave me a great list of specific ways to think about the credibility and reliability of social media-based research.

Now before I begin, I want to note that while may people use the term ‘social media research’ to be about sentiment monitoring, both of these speakers were more focused on using communities’whether private, branded ones (such as a company might build) or a broader one (Facebook)’as a place to conduct research. So the context here is online communities’open or closed, brand-hosted or not’as a sample source.

So How To Improve The Perceived Reliability and Credibility of SM-gathered Research?

1. Trust but verify. As Dawn suggests, ideas or results from a specialty community can be vetted at the brand’s website as a single question poll. For example, if you learn in your community that feature X is critical, ask a simple question on your website. Is it? Sometimes you may find that the larger group is aligned with the smaller, more specialized one. But in any case, you don’t want to over promote the results from the community without first vetting with a larger population. This will help overcome legitimate objections to community-based research results’such as, ‘how can we trust data from a group of people obviously already biased towards our brand’?

2. Educate research clients about the community, as a preemptive strike. Your audience may be making some incorrect assumptions about the community profile. Sean from Facebook shared some data that would make even the biggest cynics of convenience sampling take a second look. Here are some highlights:

3. Demonstrate affordable innovation. One of the powerful examples was from Facebook, on the topic of ad testing. Consider this scenario: Brand X plans to start a new ad campaign and wants to test effectiveness. On FB, the target market can be selected (based on interests, not just demographic data). Then the target is exposed to the ad, likely in multiple versions, while a small percent is held out as a control group. Next step: post a 1 question poll to the target market. The question might be on brand recognition, brand preference, purchase plans’whatever is relevant. One can compare these results easily between the ad-exposed group and the control group. But in this way, the brand can tie the ad testing to the polling question with whatever timing it wishes (even same day). Cool.

Many researchers maybe feeling skeptical about gathering data from communities. But as these points illustrate, it may not be as risky as one might assume. And also, we all just need to be realistic’nobody is saying this replaces the need for all traditional market research. Still, after these sessions, I am more convinced than ever that it will replace some.

[As a tangent, both speakers happened to emphasize the value of the one-question poll. It gets a much higher response rate than a link to an online survey. And since you are working with a known community anyway, tedious, invasive questions about age, gender, and such do not need to be gathered. So get to the point, don't abuse the audience, and ask a single question.]

The first TMRE Poll closed last week, and you answered the question: Do you think the market research industry as a whole has embraced social media as a legitimate means to gain consumer insight?

And the results are: 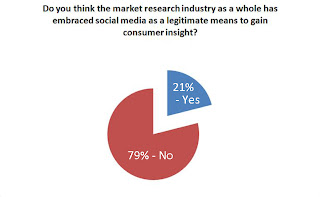 The University of Maryland recently did a study to test the effects of Generation Y separating from all forms of technology, in specific, iPods, cell phones and computers. Two hundred Maryland students were separated from all forms of media for 24 hours.

After 24 hours with no media interaction, the words the students used to describe the experience were much like those of drug and alcohol addictions: In withdrawal, Frantically craving, Very anxious, Extremely antsy, Miserable, Jittery, Crazy.

Generation Y uses their media not only to stay connected with the world they have built, but also as a news information source. Many don’t watch the news, but instead find out about major events from Twitter and Tumblr. The article also noted that much of Gen Y was oblivious to branded news and information.