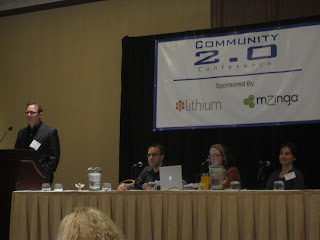 Now we’re beginning our panel discussion to look at specific points and difficulties, each have come up with their specific ‘lessons learned’ these past 9 months during the recession so far:

From Bill, some initial points based on recent survey Forum One Networks recently captured, with the following responses:

Now from Peggy, her lessons include:

First question, hardest decision to make in relation to your community in the past 9 months?

Peggy: A user who became heavily involved and active regularly and became disruptive to the overall community. Using guidelines they have in place, they publicly acknowledged the user and the issue created by their activity, but at the same time, they had no choice but to remove them from the community.

Beth: Recently launched the Digg Bar, and while there was overall initial positive responses, there were significant concerns expressed by publishers and users that resulted in significant changes to the initial functionality available in Digg Bar to satisfy those legitimate concerns. It was difficult to have to roll back capabilities they felt strongly about having in the Digg Bar, but the result was more positive to respond and react to the feedback.

Question: Who or what inspires to you improve and expand your community?

Peggy: To see that the community takes it upon itself to help the community survive since they are non-profit. One example, they took it upon themselves to generate a campaign to have new features developed on the community that her budget could not accommodate.

Nick: It’s really about helping people, getting the call from someone who needs assistance to learn how to learn about what is happening online. In working with these companies, the result has been to learn about unique niche communities that exist that often are not regularly known about.