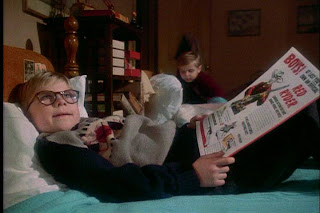 This is a picture of Ralphie, the protagonist of A Christmas Story, dreaming about the obsession of his childhood: The BB gun.

Current TV’s Mario Anima used this as his opening gimmick for a talk that focused primarily on how you can build community by catering to that most human of desires: the need to belong. And oddly, instead of harping longer on the BB gun, he used a separate Ralphie obsession to structure the rest of his talk: the Little Orphan Annie decoder ring campaign, a partnership between the ’30s-era radio series and Ovaltine.

How it went in the film: Ralphie, a dedicated listener of “Little Orphan Annie,” collects UPC codes for Ovaltine in order to acquire the aforementioned secret decoder ring, which is supposed to reveal a secret message about the future of the show. The ring is mysterious-looking and comes with a letter signed by “Annie” herself.

But when Ralphie finally decodes the message, all he finds is an ad encouraging him to drink more Ovaltine. PWNED!*

“A lot of what we’re doing is the new version of the decoder ring,” Anima says, wistful.

The purpose of the decoder ring campaign: to build inclusion, exclusivity, interaction, accessibility. These should also be your objectives. The trick is, at the end of the day, to not give your participants a Ralphie payoff. You want them to feel all their labour on your behalf has been worthwhile.

To illustrate how Current TV caters to exclusivity/inclusion, Anima gave the example of the Rotten Tomatoes Show, which solicits opinions for a given film, then stitches all the videos it receives from users into one big video response. It’s the old “You’re gonna be on TV!,” with lower barriers to entry.

Every show has obvious participatory/shareability elements, too.

Then there’s this question of interaction. Anima says most Current TV employees are on Facebook and Twitter; they’re accessible, responsive and solicit opinion. Consider Bryan Safi, the host of the popular “That’s Gay! video series. He answers questions users provide in a closed feedback system:

Curiously, after all this Anima hastened to add that you should encourage users to appear on Twitter, but how they behave on Twitter will determine whether you want to claim their profile as a company one – or, implicitly, even if you want to expand them as a social media star personality. (It’s not my view that this is something you can really control, but Current TV tries: not all of its employees are permitted to answer questions like Safi can.)

If you want, you can follow Mario Anima at @manima.

*The Wikipedia article on this campaign says that it was only an urban legend that kids got Ovaltine ads for all their effort. But hey, thanks to Ralphie, the urban legend is all we remember of the effort today. Tough luck, I guess.