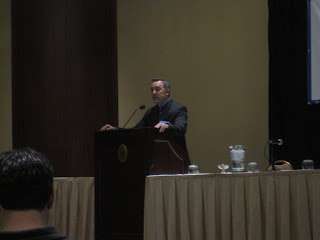 Our first keynote of the morning is given by Andrew Rasiej, Futurist, Social Entrepreneur, Founder of Personal Democracy, and co-founder of the award-winning blog, TechPresident.com. He writes a bi weekly column for http://www.politico.com/ and he appears as an expert on the Internet and politics on major media channels including CNN, ABC, CBS, NBC, NPR, FOX, BBC, SKY News, the Daily Show, and is quoted regularly on this subject by major newspapers internationally including The New York Times, Wall Street Journal, Washington Post, USA Today, La Monde, The Financial Times, etc, and major magazines including The Economist, Wired, Time, Newsweek, Fast Company, and Popular Science among others.

He begins talking about his early career as a concert promoter in NYC, and from reaching out to his neighbors about his concerts is he began to promote his concerts online. In time he began involved with a community board associated to a local school district.

Talks about these early community efforts, working with creating computer labs within local NYC schools. One of the first issues faced in the late 90s was the lack of internal resources to support technologies within the school. In 1997 only 1 network administrator supporting New School School board.

These early programs he involved and worked with led him to work with political groups, and his first efforts with Tom Daschle to educate the Democrats in Congress about the Internet. Suffice it to say, confusion was rampant.

In time he went to work with the 2004 Howard Dean presidential campaign, and he began the earliest political forays online. Andrew stresses one major issue with his campaign…he thought these online efforts revolved around him as an individual, and never fully understood that the it was a community coming together around him, sharing common interests, but still diverse and with unique expectations.

Now as he looks back at the Barack Obama presidential campaign, and he describes it as a surfer riding a tsunami of user generated political content. However, he expresses the concern that the individuals who do not understand the nature of social media, are unfortunately the majority of our elected officials.

Andrew then made his own attempt to run as Public Advocate in 2005. During this campaign, he advocated that NYC develop a city-wide WIFI network. Unfortunately, he came repeatedly into contact with MSM and traditional politicians who simply didn’t understand the value and importance of making such technology available.

Now Andrew is turning to the Obama administration, who he likens as our first ‘true tech president’, however, the federal bureaucracy is simply so slow to change and unfamiliar with the nature of social media it is unable to innovate fast enough.

Now he’s highlighting the sheer difficulty of meeting with so many public leaders who simply do not understand how much the world has changed, and continue to oppose public policy that increases transparency. He cites the following: U.S. Senate continues to collect donor information digitally, converts it to paper and submits to the Federal Election Commission, who then spends 6 months converting it back digitally. Every attempt to change this law requiring the conversion has been voted down by the Senate.

Once again he returns to the issue of technology in our schools. He pointed out that today in NYC schools, students receive 1 hour of classroom time with a computer. He highlights how many political leaders continue to stress the traditional needs of student learning that revolves around non-technology efforts.

Now for some questions:

You cite Obama as the first tech president, but has ramped down his social networking efforts, do you believe he will ramp up those efforts?

Andrew agrees that this has been an issue but clearly it is primarily an infrastructure issue. Issues with the website infrastructure, internal personnel resources (during his campaign he had far more individuals working just on social media), but clearly Obama is interested in improving the technology in order to expand the collaborative tools such as commenting on their sites. Unfortunately this will require experimentation and time to launch these efforts. But Andrew does believe that Obama will launch these efforts and new policy initiatives to expand availability of technology.

Do you see specific to government that the innovation will be launched around them or will they ultimately learn to accept the nature of social media and begin to develop new policy that maximizes its use?

Andrew first clarifies his point that first that this technology is new, and there is still so much to learn about how best to use this technology and what changes may result. He cites the example of Wikipedia and crowdsourcing, how expertise and reputations impact the quality of content available. In time such a notion may be applicable in politics as we use this technology to impact who we select to make decisions on our behalf.
Updated