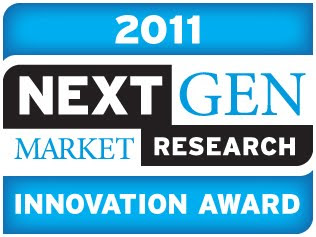 In a mysterious turn, Anderson also reported this year’s awards have been reorganized and will feature three new categories in addition to the ‘Individual’ category, but withheld any further details except to note that NGMR has dropped last year’s ‘Client’ category, effectively putting research agencies in the running against the likes of IBM and Heinz. (I’ll admit I’m intrigued to see how that plays out!)

Upon scanning an advance courtesy copy of the list Sunday night, I was delighted to see several old friends and familiar companies, any of which would make a prime candidate for an award whose premise is the productive disruption of research as usual.

But I was also surprised to find that some of the trendier research areas today, such as mobile, neuroscience and Anderson’s own personal favorite, text analytics, were conspicuously underrepresented.

So, I went straight to the source to ferret out what, if anything, the finalists’ selection says about the industry.

It’s worth noting up front that as far as the judges are concerned crowdsourcing remains a definite disruptor.

Three companies on the list offer a crowdsourced type of service: KL Communications, Infosurv and BrainJuicer. Anderson confirmed that the committee was sufficiently impressed by the first two’s take on crowdsourcing to bump them to the finals. As for BrainJuicer, Anderson noted their submission’s emphasis on ‘twitterbots’ also earned them a nod from some of the judges.

As far as mobile goes, Anderson pointed out that Ipsos’ ‘Real Time Event Research’ program has a mobile component. Nonetheless, there weren’t any other mobile standouts.

Anderson explained the mobile short shrift was largely due to the fact that ‘this year’s mobile submissions weren’t demonstrably different from what we received last year…Keep in mind mobile research has been around for over a decade,’ said Anderson.

‘Mobile is getting a lot of attention, partly because of the iPhone App bubble and also in polling circles as the number of cellular-only households continues to rise,’ he added. ‘But I think people equate the buzz around mobile with innovation, and from what we’ve seen, there’s simply not anything terribly disruptive happening in this space. That doesn’t mean mobile isn’t an important tool; it’s just not causing an earthquake at this point.’

Regarding neuroscience, Anderson said that from a research perspective, ‘The field shows promise, but it isn’t fully baked. Clients clearly are interested in it and experimenting with it, but the jury is still out when it comes to results. It’s tough to make a case that neuro-based tools have had a genuinely disruptive impact on how research is conducted’yet. I honestly think neuro has a few years to go before it really shakes things up.’

Last but not least, where were the text analytics providers? Only Radian6 (acquired in March by salesforce.com) made the list. This threw me.

Anderson conceded he was disappointed with the lack of submissions from text analytics providers, but that there was a valid reason for it. ‘Of course, I was initially troubled that we weren’t hearing from companies in this space, so I asked around. I thought that perhaps they felt there might be some competitive conflict of interest with me as a judge on the selection committee,’ said Anderson.

‘It turns out that, yes, that was a factor, but only to the extent that they were guarding their IP pretty jealously from everyone,’ said Anderson. ‘There’s a lot of development activity going on in the text analytics space right now, and it’s very competitive. So at the end of the day, the providers I know and who know me well enough to be frank told me that they were interested, but decided they were better off keeping their cards close to the vest.’

Shifting gears, a review of the finalists in the ‘Individual Disruptor’ category was, for me, like looking at a line-up of the usual suspects, to their credit. Here we have a very solid list of folks who push the innovation envelope, and I don’t envy the judges; narrowing it down to just one will be difficult.

Although the reason/s they were nominated and selected might seem obvious to anyone familiar with the names on this list, I wondered if there were any specific criteria the judges were particularly keen on.

Anderson told me that while not all of the people on the list possess all of these traits, they tend to share the following:

- A chronic dissatisfaction with the status quo’whatever it may be

The winners’and the three new award categories’will be announced November 8 at The Market Research Event. Anderson will moderate a panel of the winners directly after the ceremony.

For information or to register, please visit us online at TheMarketResearchEvent.com.

Editor’s Note: A list of the individual and company finalists is available on the NGMR blog.

Congratulations to the finalists and good luck!

ABOUT THE AUTHOR/INTERVIEWER
Marc Dresner is an IIR USA communication lead with a background in trade journalism and marketing. He is the former executive editor of Research Business Report, a confidential newsletter for the marketing research and consumer insights industry. He may be reached at mdresner@iirusa.com. Follow him @mdrezz. You can meet him at TMRE 2011 in Orlando this November!