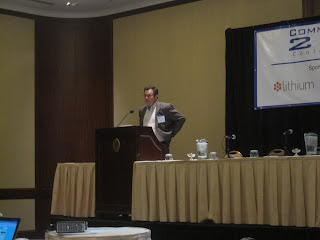 Chris Tolles, CEO of Topix is this year’s conference chair and is kicking of the conference with an opening speech. Chris came to Topix from Spoke Software, a business social networking company, where he was a co-founder and VP of marketing. Before Spoke, Chris was a Director of Marketing at AOL/Netscape for AOL Music, Netscape Search and Directory Products. Chris was a co-founder and VP of Marketing at NewHoo, and led the sale of the company to Netscape. After the acquisition, NewHoo was relaunched as the Open Directory Project at Netscape and became the world’s largest human edited directory of the web, and is still used by companies like Google, Alexa and AOL. Previous to NewHoo, Chris held a variety of sales, marketing and management positions at Sun Microsystems. Chris graduated from the University of California at San Diego with degrees in Computer Science and Economics, where he was awarded the Michael J. Addison award for his senior thesis about the online information industry.

Chris begins his comments speaking briefly about the history and the foundational technologies that were in fact communities, though not as discussed currently as social media. Usenet, Geocities, so many sites and technologies that have been part of the Internet have always incorporated elements of interactivity and community. You can’t separate the elements of community from the Web. Looking at the 2008 US National election helps us see how much these collaborative technologies.

Now Chris has turned it over to Andrew Rasiej.